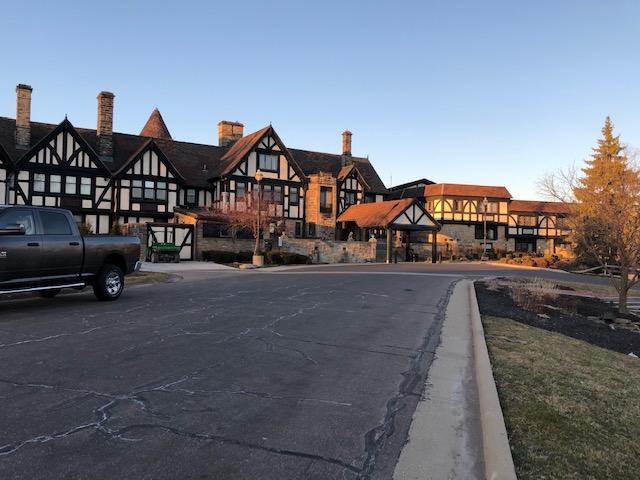 Nestled within Punderson State Park in Northeast Ohio, this beautiful manor house sits peacefully near a large lake. Its charming Tudor-style architecture reminds one of a storybook fairy tale. A gargoyle, which legends say can protect a site from evil, sits to the right of the entrance. The overall first impression is striking and rather breath taking. However, sometimes looks can be deceiving, and legends don’t always live up to their claims.

The history of Punderson Manor is prevalent on the internet. According to various sources, the estate, which now includes Punderson State Park was settled in 1802 by Lemuel Punderson. In a story that belongs in the Odd Death Hall of Fame, Lemuel allegedly rowed a bathtub to the middle of the lake, pulled the plug and drowned. Lemuel and his wife Sybal are buried on a hill near Punderson Lake and a much beloved rocking chair of Sybal’s is displayed at the Geauga County Historical Society museum.

Afterwards, the property was transferred to a W.B. Cleveland, who originally built a structure on the land. The property was then transferred to Cleveland’s son-in-law and then to a Detroit businessman named Karl Long. Long began construction of the manor house in 1929 but lost his fortune in the Great Depression. In 1948, the property was returned to the state and renovations to the manor house continued until 1956 when it was opened to the public. It underwent a second renovation, which consisted of an addition, so there was then a “new” part and an “old” part to the house. It was opened again in 1982.

According to most internet articles, claims of otherworldly activity at Punderson Manor began in the mid-to-late-1970’s. There are visual claims of apparitions of Karl Long, Lemuel Punderson, W.B. Cleveland (a psychic mentioned that a male spirit, possibly Cleveland, would not leave until someone returns a rocking chair to the manor. Sybal’s rocking chair?), a lumberjack, someone hanging in the dining room, and various other strange men and women. There are also auditory claims of hearing children’s laughter (especially in the old wing near the library); and bangs and bumps from unoccupied rooms. There are electrical energy claims such as TVs and lights going on and off at odd times and fresh batteries dying in cameras as well.

Fringe Paranormal got involved with Punderson because a relative of member LeeAnn C. had his own paranormal experience there:

“Erika’s Grandpa and Grandma stayed in the now Windsor Room. They were downstairs at dinner and he noticed the hem of his pants was coming out, so he went back upstairs to change them…when he was in the closet, he felt something tugging at his pants and looked down and saw the thread being pulled from his pants. After that, they were in bed and could hear someone like backing into their door and sliding down it.”

Erika is LeeAnn’s daughter, and she spearheaded this visit to Punderson along with her cousin Tiffany whose father once worked at the manor. Erika’s 9-year-old daughter, Macy, who loves paranormal shows, was also there. Erika rented the Windsor Room, which is reported to be the most haunted room in the old wing of the manor, and the room in which her grandparents were staying when they had their experience. LeeAnn rented a room farther down the hallway from the Windsor Room, but still in the older section of the manor, and that is where I, Fringe Co-Director Kelly, met up with her in the evening of March 26, 2019.

When I arrived, LeeAnn and I strolled around the manor for a while, and LeeAnn filled me on some of the latest claims she’d heard from employees of Punderson. Just recently, for instance, a group of women asked a staff member to take a picture of her and her friends in the lobby. He snapped three quick pictures of them on her phone. When they looked through the pictures, the middle one had an unexplainable extra face. From what I understand through my research, this was roughly in the same area where someone “saw” the body of a man hanging.

The desk clerk reported to LeeAnn that, not long ago, she was showing a couple and their young daughters around the manor. When they got to the hallway by the library, one of the girls took off running. When they caught up to her, they asked her why she had run away. “I wanted to play with that other girl,” the daughter responded. The adults looked around, but they found no other children.

LeeAnn, Macy, and I decided to start our investigation in the library. It was a small, simple room, but it had a couple of comfortable chairs and enough books for someone to read if they were on a short vacation. It was also next to the hallway where the little girl ran after the alleged phantom child.

Excluding the three other guests of the manor showing up, and us scaring each other with our unexpected presences, nothing of note happened while we were in the little book nook. We decided to head back to the Windsor Room where Erika and Tiffany were ordering pizza for dinner.

The layout of the Windsor Room is somewhat odd. First, one walks right into a living room. That’s not so unusual, of course, but then off to the right is a jacuzzi/sauna area.

The door to the single bedroom is at the end of the left-hand wall, with the bathroom immediately to the right upon entering. Across the bedroom and to the left is the large walk-in closet where Erika’s grandpa had his mysterious thread-pulling experience. It was roomy enough for all five of us, so that’s where we decided to start our informal investigation. We spent about 20 – 25 minutes in there conducting an EVP session. Nothing much was happening, so we decided to go back into the living room.

I was the first in line, and the minute I crossed the threshold from the bedroom to the living room, I heard a weird child-like voice say, “Bye Bye.” I was shocked and turned to my companions asking if anyone else had heard it. “It’s the VTech,” Erika stated by way of explanation. It turned out that LeeAnn, Erika, and Tiffany had done their research. They noticed that spirits of children were a much-documented claim at Punderson, so they had brought a few items along with them. Besides the VTech toy, they had set up a chessboard and some cards.

Seasoned paranormal investigators know that electronics can be unpredictable on their own without any help from the other side. The strange thing about the V-tech toy is not that it said “Bye Bye”, it is programmed to do so to prolong battery life, as little ones often don’t remember to turn off their toys. The strange thing is the amount of time that had elapsed before it happened. Erika created the following video showing the same VTech toy that was set up in the living room and the amount of time it takes for it to say “Bye Bye” once it is activated:

The total time is about one minute. Considering no one had activated the toy (I didn’t even know it was there and we had eaten pizza in the living room before we went into the closet) and we had been in the closet for at least 20 minutes, this was a very odd occurrence.

Slightly weirded out, but also somewhat excited, we decided to conduct our next mini investigation in the living room. We asked the standard questions: “What is your name?” “What year is it?”. I even tried to cajole any lingering spirits into playing chess with me. Nothing much happened until Erika asked, “Can you give us a sign?” Suddenly, there was a roaring sound like a bathroom fan. Upon inspection, after a couple stunned “what the heck?!” seconds, we realized the jets in the jacuzzi had turned on. Because of the aforementioned odd layout of the Windsor Room, this was only a couple feet from where we were sitting. After glancing over the instruction manual and pressing every button available in the area, we finally got the jets to shut down.

Like anytime something usual happens in an alleged haunted location, the five of us were half thrilled and half fearful that this event occurred. It seemed like we had just gotten settled back down, when whoosh, the jets came back on again. This time we knew what to do, so got back up and hit the correct button to shut it off. Then later, it happened again. We realized, after looking through the instruction manual, we must have accidentally set a timer for the jets to turn on every twenty minutes when we were pressing every button in the jacuzzi area during the first incident. I stayed to time this theory and, sure enough, the jacuzzi roared to life again precisely twenty minutes after our shutting it down the third time.

I had plans for the next day, so, unfortunately, this is when I took my leave despite LeeAnn offering to let me stay with her. She promised to talk to the manor staff the next day and let me know about any other phenomena that might arise. I found out then that 1) the jacuzzi did not come back on again, 2) The maintenance person said the jets should not have come on in the jacuzzi unless there was water in it (the instruction manual said this as well) and 3) Macy decided to stay with LeeAnn in her room instead of sleeping in the Windsor Room!

My conclusion is that the claims of electronic mishaps seem to be true of Punderson Manor. Besides the toy and the jacuzzi, when I went to analyze my audio evidence, there were no recordings from that day on my device. Did the batteries die and I just didn’t notice? It doesn’t seem likely, as I had turned my recorder on and off at least three times for the three different sessions we had. Also, I have recordings of the adventure I went on the next day. I’m at a loss as to what happened. Perhaps our experiences that night were paranormal and perhaps not, but they certainly were unusual. The toy, the jacuzzi, and the recorder seem to be unrelated so far as to scientifically deduce why they all malfunctioned in the same couple of hours. For example, faulty wiring may explain the jacuzzi jets, but wouldn’t have anything to do with the battery powered gadgets.

From my experiences in just those few hours that night, my trip to Punderson Manor was, without a doubt, a worthwhile adventure that I would recommend to any paranormal enthusiast. Decide for yourself whether Punderson Manor, as the stickers in the gift shop say, “Got Ghosts?”