Hot Lake Hotel sounds like a nice place to visit, provided you don’t mind the possibility of the paranormal. These accommodations may not be the premiere vacation spot they once were, but it seems that some guests are attached enough to want to stick around long-term. 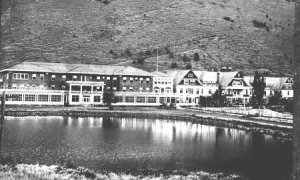 Hot Lake Hotel was constructed in 1864 in Union County, Oregon. It quickly became a popular place for vacations, primarily because of its unique thermal waters.  The hot spring provided another way for guest to relax and rejuvenate while enjoying the tranquil scenery

The business was purchased by in 1917 by Dr. W.T. Phy who installed state-of-the-art medical facilities which included a surgery room, hospital and radiation treatment equipment. Hot Lake Hotel would serve as both a luxurious resort and hospital until the mid-1930s.

Things changed in 1934 when a fire destroyed much of the original hotel. The 300 room building was almost decimated, with nothing but the brick structure remaining.  From then on the hotel would only function as an asylum, nursing home and restaurant.

It was eventually abandoned and fell into disrepair in 1991. The property was purchased in 2007. Restoration efforts helped give it new life. By 2010 the old hotel was working yet again, this time as a bread and breakfast, spa and museum.

One of the most commonly reported apparitions at Hot Lake Hotel is the spirit of an old gardener. The man is believed to have committed suicide on the property, possibly by hanging in the grand ballroom or leaping from the upper levels. He has been seen lingering in the shadows, usually carrying a spade.

A small boy is believed to run across the hotel’s top floor. He is generally upbeat and happy. Most describe him as laughing with a smile on his face.  While his demeanor is positive, his appearance is often not. Witnesses also claim that the right side of his body is severely burned. Many think that he may have perished during the tragic fire in 1934.

An elderly woman is also seen moving up the staircase to the second floor. The apparition usually presents an experience with visual and audio elements. Her aged, muttering voice often accompanies her ghostly appearances.

The third floor is home to a piano that once belonged to General Robert E. Lee’s wife. The instrument plays by itself on occasion. Nearby rocking chairs also rock on their own with no one around.

The old mental asylum may have introduced the more deranged and unsettling spirits found at the Hot Lake Hotel. These apparitions usually speak unintelligibly, often in grunts.  They usually appear in the upper levels close to the windows. Disembodied screaming is sometimes heard in the former operating theater.

The Hot Lake Hotel is still open as a B&B, spa and museum. The current owner is not too keen on discussions of ghosts on the property, although he does have an appreciation for its history.  The old mineral pools have since been covered over, however there are plans for adding new pools in the future.

Have you been to Hot Lake Hotel (or would you like to go)? Share your personal experiences or investigative approach to this location in the comments.

One comment on “The Paranormal at Home: Hauntings in 50 States – Oregon’s Hot Lake Hotel”