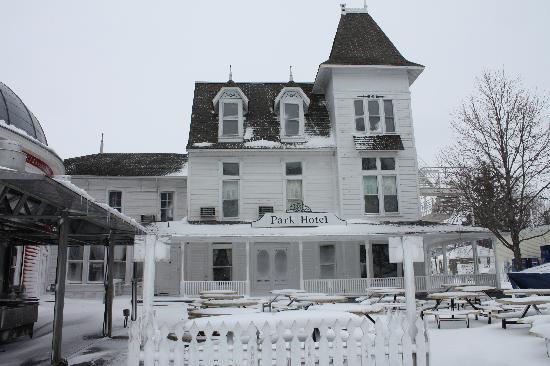 Fellow paranormal investigators, remember the first time you went on an investigation? Whether it was a residential home, a business, or a well-established paranormal hotspot, you arrived at the location buzzing with excitement, ready to have an extraordinary experience, and then…equipment set-up. For non-ghost hunters, set-up sounds something like this: Where are the outlets? Do we have enough extension cord? Which piece of equipment should go where according to the claims? Does anyone have an extra 9-volt? Sometimes this process can take up to an hour, depending on the size of the location! Over the years, we at Fringe Paranormal have tried to incorporate at least two visits to the places we investigate. Whether it be a pre-investigation interview with clients to discuss goals and get the lay of the land or an actual second investigation night, it is helpful to have some physical familiarity with an alleged haunted location.

We got lucky with Put-In-Bay. Because we investigate there during the off-season, they’ve always invited us to stay for an entire weekend. Over the past ten years, our routine has been this: we ferry across the sometimes calm but sometimes turbulent (especially in November) waters of Lake Erie. Once we reach the dock, we motor our vehicles off the vast boat and down the scenic island roads to the beautiful, historic Park Hotel, where we drop our bags and check-in with Phillip “Tip” Boyles. This is no ordinary hotel check-in, however. Instead of handing us keys and telling us which rooms to go to, Tip dishes out any new-in-the-past-year paranormal happenings on the island. Afterward, we choose our rooms. Will Room 4 or Room 21 have activity this year? Could a supernatural encounter happen in a room that we haven’t stayed in before? We never know. I tend to choose my weekend abode based on one of two vibes: a spooky aura or a sense of belonging. For me, either one of those feelings could parlay into a shoot-straight-up-in-bed encounter with the unknown. Then, after the room-choosing ritual, we’ll make our rounds. We’ll visit the cemeteries, the restaurants, and other allegedly haunted places that we may or may not have investigated. But, like moths drawn to a flame, we always come home to the Park Hotel. The Victorian-era style structure has remained a constant throughout the years and has become our steadfast “base of operations.” We’ve fallen in love with the
place. It’s always bittersweet on Sunday morning when we have to re-pack our gear, and, after having a check-out chat with Tip, board the boat and head back to the mainland, all bleary-eyed and glumly resigned to going back to our everyday lives.

There are upsides and downsides to investigating the same location numerous times. The upside is that you know the history and the hot spots. Instead of being tedious, equipment set-up is a breeze because you know where to aim cameras and where to place video recorders. When investigation time rolls around, you know which spaces to spend more time in because you know what’s been successful in the past. The downside is that you can get complacent because of the upside. You place the same old cameras in the same old areas and ask the same old questions during the EVP sessions in the same old rooms. Of course, this “if it ain’t broke, don’t fix it” approach is all well and good if it yields results. But sometimes you just want to try something new. So, when Amy, one of Fringe’s innovative investigators, suggested a low-tech night, it sparked the team’s imagination. Old techniques as something new? Yes, please! After seeing nothing but technology (a lot of which is highly questionable) on the paranormal shows, taking ghost hunting back to its roots seemed almost cutting edge and, well, just plain fun.

Therefore, on Friday, November 8, 2019, not only did we rumble onto the mainland ferry in cars filled with techno-gear, but we also stowed away baby powder, pendulums, dowsing rods, and vintage toys. We had resolved to dedicate our first night solely to investigating the Park Hotel using simple items that did not require batteries or any other type of electrical input. Our focus would be areas of long-existing claims, the ones we’d heard since our very first year of investigating on the island. Amy took the lead and designed the following trials in the hopes of recreating specific anecdotes we’d heard:

The Claim: One day, a maid was cleaning room 21. After stripping the bed, she stepped out of the room to put the dirty laundry in a basket. Upon returning, there was a pile of children’s things on the bare mattress.
Our Experiment: We placed children’s blocks on the bed. (Nope, we couldn’t find an “e”!) We left these all weekend; nobody on the Fringe team chose to stay in Room 21. We surveyed them several times and did not see any changes throughout our stay.

The Claim: The chair moves from its spot near the dresser over to the desk in this room at the end of the second-floor hall.
Our Experiment: We stacked dominoes on both the chair and the desk. Again, no one stayed in this room, so we left them all weekend. Also, again, we did not note any movement or changes in position.

The Claim: Motel guests have heard footsteps outside their rooms in the hallway on the second floor. Sometimes this is reported as children running or playing in the hallway late at night.
Our Experiment: We placed a tray of baby powder on the floor and surrounded it with several children’s toys. We changed the tray’s location and the types of toys a few times throughout the weekend. The powder and the toys seemed to remain untouched, though.

The Claims: Room 4 lodgers have reported hearing scratches and voices emanating from their closet and/or the room next door. The room next to Room 4 is a storage closet and is unoccupied at night. I also had some very creepy dreams while staying in Room 4 one year – but I am not ruling out the possibility that they may have happened because I read the “Dear David” story right before bed!
Our Experiments: We conducted a question/answer session using a pendulum on the second floor. We asked for the pendulum to swing side to side for a “yes” response and in a circle for a “no” response. The pendulum was attached to a tripod’s base to eliminate confirmation bias, as the slightest hand movement can cause a pendulum to swing, even without the holder’s knowledge or intent. We did decide to run voice recorders during this session for double verification purposes. Our pendulum contraption sat where a side hall converges onto the main second-floor hallway. Room 4 is at this corner. We did not notice any visible responses to our questions while watching the pendulum.

We also decided to sit inside the closet next to Room 4 to see if we could elicit some scratching sounds and discover their origin. Several times, the closet-sitters jumped, startled, hearing a type of scurrying noise that made them think an animal was in the closet with them. It was not out of the realm of possibility that a raccoon or squirrel or some other type of small animal could be in there. Like most over-a-century-old buildings, the Park Hotel has its weaker, open areas. However, the producer of the unsettling noises never showed itself. We decided to leave a few kibbles of dog food in the closet. Surely, food would lure out any uninvited lodger when we left the area overnight. We checked on our scattering of treats the following morning, throughout the next day, and the Sunday morning before our departure. The food remained right where we left it all weekend. Does that mean there wasn’t a real, alive animal scuttling about in the closet that night? No. But it does seem odd that any wild creature would refuse an offer of sustenance.

One might call this an unsuccessful evening of investigating. However, most paranormal long-haulers know that true phenomenon very rarely happens on command. Usually, it happens like it did one of the first years we investigated the Park. A few other Fringe members and I were sitting around the lobby making plans for the weekend investigation when we heard a clang from the kitchen area. It sounded like someone dropped a large metal spoon into a metal stockpot. We didn’t think much at first. We figured Fringe Co-Director Don Danger Collins, who had just arrived, bumped into something as he made his way through the kitchen from the back door. Then we waited. And waited. No one appeared. And no one had been in the kitchen. Did we have cameras rolling or recorders running? Of course not!

Another time a shower door slammed shut behind me while I was brushing my teeth at a second-floor sink. Loudly. After my heart rate slowed, I started trying to re-create the noise. The most I could get naturally out of the shower door was a slight squeaking as it shut slowly on its own. When I told my team, I got “well, you just took a shower, it was steamy in there” and “doors shut on their own all the time.” (This disbelief, by the way, is why you should always investigate with at least one other person. Skeptics will never believe you if nobody else is there to corroborate your story.) Anyway, I tried the rest of that day to recreate the occurrence. I left the shower door open and went back to check on it several times; it never shut. Later that night, I decided to recreate the event. I went into that shower stall, turned on the water, shut the door, let the water run the same amount of time as the shower, opened the door, turned off the water, then left the door open—all night. In the morning, the door was still open. I felt a little bit of self-satisfaction, even if nobody else still believed me. Do I think there’s a creeper ghost in the second-floor bathroom of the Park Hotel? Probably not. But, do I feel something unusual happened to me there – yep, I do.

So, even though our “old as new” experiments didn’t catch anything paranormal on demand, we know it’s there. We can picture children running up and down the hallways, dressed in early 1900’s garb with their nannies chasing after them when incorporeal footsteps in the hallways wake us up at night. The Park Hotel was one of the first hotels to offer spring mattresses instead of ones stuffed with straw, and we feel that comfort when we take our mid-afternoon naps. Even sitting in the lobby with its painted, etched windows and antique furniture takes one back 100 years. There’s no denying the history steeped into the Park Hotel’s bones. And I think Amy’s idea of using “historical” ways of investigating such a place was novel in this day and age of electronic gadgets. Wouldn’t spirits from the early 20th century be more inclined to interact with objects they’ve seen before? Maybe. If there were any clear-cut way to detect the presence of a ghost, everyone would be doing it. As for us, we’ll keep experimenting.