Some people believe that shadowy figures lurk amongst the bookshelves of the library. Others say disembodied footsteps disturb the sanctity of this historic place. Does a restless soul seek the comfort of a good book? Sometimes one needs to read between the lines to find the truth. Join Fringe Paranormal as we “check out” the Maumee library

History and Claims (with assistance from Librarian Mary Chwialkowski) 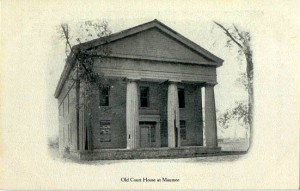 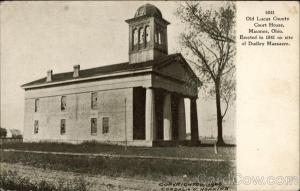 The Maumee branch public library is filled with history both literally and figuratively. On August 20, 1794, near the present-day town of Maumee, American forces led by General Anthony Wayne won a decisive victory over Indian forces at the Battle of Fallen Timbers. The battle opened the entire Northwest Territory for white settlement. This land was also the site of Dudley’s Massacre during the War of 1812. Lucas County was formally organized in 1835. At that time, Ohio and Michigan Territory disputed the ownership of the strip of land along the border . As a move in the dispute, Ohio formally organized part of the disputed area as Lucas County, naming it after the incumbent governor of Ohio, Robert Lucas. Maumee was the first county seat of Lucas County which led to the construction of the Lucas County Courthouse in 1840. The building served as the county courthouse until 1852 when county residents voted to return the governmental seat to Toledo.

From 1861 to 1874 the old courthouse was occupied by the Central Ohio Conference Seminary. In 1860, John W. Hiett, with his wife as preceptress, established the Elm Grove Normal School. One year later it was changed to the Central Ohio Conference Seminary. Ill health caused his removal to Toledo in 1864 and he became one of the owners of the Toledo Commercial, while at the same time he was actively interested in various other business activities, becoming widely known as a real estate dealer.

This building would also host a glass factory and a manufacturer of papier mache horses. It was also the favorite play spot for Maumee children who often risked life and limb by climbing up and down inside the old pillars. Eventually the building was abandoned and in 1917 was demolished. The Maumee library was established in 1918 with a $10,000 gift from steel baron and philanthropist Andrew Carnegie and served as the main library of the former Lucas County library system until 1970. The 1930s and 1950s would see additions and changes to the library. In 1970, the Lucas County, Toledo, and Sylvania Public libraries agreed to merge and formed the Toledo – Lucas County Public Library. Starting in June of 2000 a $2.5 million one year project began which would change the structure of the Maumee branch library. This project would see 10,000 square feet demolished, 10,000 square feet remodeled, and 11,000 square feet of new space added.

Claims at this location include sightings of dark shadows (commonly known as shadow people), apparitions, and books falling from shelves. Chairs have also been heard sliding across the floor. People passing by the windows outside the quiet study room after hours report seeing someone moving around inside. Apparitions tend to be seen near the childrens area which is the oldest part of the building.

The Fringe team arrived at 8pm and, after a tour of the facility, we set up our equipment. Tonight we would use all eight of our video cameras as well as several REMpods. Our main focus would be on the childrens areas, the Story Time room, and the St. Lukes Community Learning Center (aka the meeting room). We split into two teams and began the investigation at 10:00 pm. EVP sessions were plentiful throughout the evening as well as trying to explain some of the claims of paranormal activity in the library. As the library is on or near the scene of a dramatic and bloody battle we tried an experiment. We reenacted a battle in an attempt to elicit activity from any entities that might be present. We did one reenactment in the main hallway outside the Quiet Study room and one inside the meeting room. Director Don played the part of an American while Agent Al assumed the role of a British soldier. During the night the team also utilized the KII meters to try and detect anything unusual. After a long investigation the team packed up their equipment and called it a night a 3:00 am. The long process of analyzing video and audio would begin after a good nights rest.

During the first two hours of the investigation the stationary audio recorder in the Story Time room picked up several “bangs”. We are not certain as to their cause. It is possible that the bangs during the first half hour of audio were from the team finishing equipment set up. An hour later more “bangs” were captured. Did these come from the book drop located near the Staff Sorting Area? We hesitate to classify the above audio as paranormal. Several agents had personal experiences. Andy and Fred heard what sounded like a moan but this was not heard on audio. We did capture what sounds like soft moaning on one of the roaming recorders. Our reenactments did not seem to stir up much activity. We can not prove it definitively but we must wonder if the apparitions seen in the Quiet Study room can be explained by reflections. The room is separated from the main hallway by window glass to cut down on noise from outside the room. These windows sit directly across from the windows that look to the outside. Perhaps light from passing cars or streetlamps play off of the glass forming the specters seen by passersby.

The Maumee library is rich in history both on its shelves and inside its walls. Our investigation turned up some intriguing tidbits of audio. It is said that history sometimes repeats itself. If that is the case visitors may very well continue to have paranormal experiences at this location. If there is something unusual occurring here hopefully the Fringe Paranormal team will find evidence of it at some point in the future.

See the reenactment video on our Fringe Paranormal Facebook page

An odd noise 7 seconds in

Another low odd noise 3 seconds in before Al’s question

1 to 2 seconds in Kelly hears a small bang

Al and Andy hear something not caught on audio (personal experience)

One thought on “Maumee Public Library”