The Paranormal at Home: Hauntings in 50 States – Maine’s Fort Knox

Military themes seem to be recurring in the realm of the paranormal. It makes sense in some ways. After all, soldiers often find themselves on the battlefield facing death head on. While Maine’s Fort Knox was a military fortification, it saw no action and no one is believed to have died there. Despite the lack of death, a large number of paranormal reports that have come from the location. 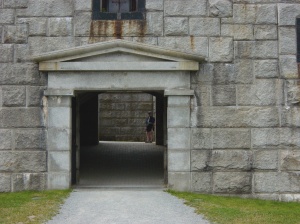 Fort Knox, which is now known as Fort Knox State Park, was constructed between 1844 and 1869 along the western bank of Penobscot River in Prospect, Maine. It was the first of its kind to be built with granite instead of wood in the state. This fact is interesting primarily because some believe that rock material like granite is an effective conductor for a phenomenon known as “residual haunts.” This type of activity is not intelligent but rather a replay of events from the past that seem to repeat like a movie.

Volunteers manned Fort Knox during the Civil War era and was later replaced by a regiment from Connecticut during the Spanish-American War.  The U.S. government declared the fort and its surrounding grounds “excess property” and put it up for sale. Maine purchased it for just over $2,000 and later gave Fort Knox “National Historic Landmark” status on December 30th, 1970.

Fort Knox is the site of numerous paranormal encounters. An apparition in a duster coat is often spotted wandering the property.  He is believed to be Ordnance Sergeant Leopold Hegyi. Hegyi served as the sole caretaker of the fort between 1887 and 1900. He was a member of the cavalry and spent significant time alone during the 13 years he stayed at the site. His routine included patrolling the grounds twice per day then stopping off at the Prospect store for a beer. Author of Haunted Fort: The Spooky Side of Maine’s Fort Knox, Liza Walsh, researched the landmark and Hegyi. When interviewed by the Portland Press Herald, Walsh stated:

People get scared, but now that I’ve read his story and learned about him, I don’t think he’s someone to be afraid of. I think he’s keeping an eye on the fort like he’s always done.

Members of the paranormal group East Coast Ghost Trackers were featured on news channel WCSH 6 Portland after capturing video evidence at Fort Knox. Investigator Stacy Stack shared the story of Hegyi, who he also believes remains at the fort. Their evidence included a strange light form that seemed to pass under an archway. Click here for the news segment.

They also captured an EVP of an unexplained laugh. Their evidence seems to match the experience of another person who visited Fort Knox in 2011.

The Friends of Fort Knox (FOFK), an organization that works to preserve the building, received an email from retired New Hampshire state trooper Keith Rayeski who came across something he couldn’t explain while visiting the fort.  He described a white object with no head or limbs that appeared in an arched doorway approximately 15 yards away in an alley.

It moved from right to left then vanished. When Rayeski went to the end of the alley to see who had passed by, no one was there. He claims that, if it had legs, it would have stood approximately 5′ 8″ tall and that it disappeared in a place where “no human could have gone.” Click here to read Rayeski’s email (search the page for “Retired Trooper sees ghost at Fort Knox 8/13/2011” – it is about halfway down).

East Coast Ghost Trackers have spent significant time at Fort Knox, which is one of the group’s favorite locations. They produced a 35 minute documentary covering the fort and sharing their experiences. One segment outlined a ghost the group calls “Mike.” They have had discussions with Mike and have also interacted with him while taking ghost tours through the fort. Tour participants were often  touched by something that didn’t appear to be there. One guest looked visibly shaken after the experience. See the video below for the full documentary.

Fort Knox remains a popular historic site. The Friends of Fort Knox host an annual Fright at the Fort event in October as a way of raising funds to maintain the property. The East Coast Ghost Trackers has compiled an evidence page with images captured at the fort. The location also received national notoriety after being featured on the first half of the April 6th, 2011 episode of paranormal TV show Ghost Hunters. Fort Knox continues to draw in historians, travelers and the paranormally-curious.

Have you been to Fort Knox (or would you like to go)? Share your personal experiences or investigative approach to this location in the comments.

3 comments on “The Paranormal at Home: Hauntings in 50 States – Maine’s Fort Knox”