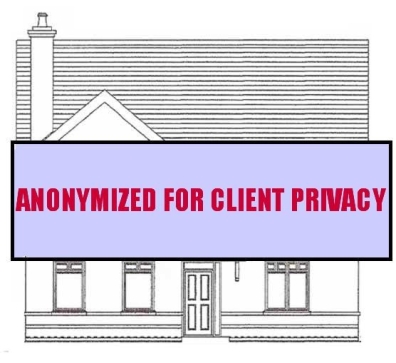 As children many of us had that imaginary friend we talked to.  To our parents it was a silly little game we played. But what happens when that imaginary  friend escapes the mind of a child and enters the real world?  What happens when that entity is purported to be the agent of unexplained activity?  One family in Walbridge, Ohio has reason to believe that just such an entity is inhabiting their home.  Join Fringe team as we attempt to bring out our inner child – literally.

The target of our investigation is in Walbridge, Ohio. The area is rural in nature with stores and restaurants within easy driving distance. Construction on this two story private residence began in 2009 after a fire destroyed the original home. The home that rested on the site previously was constructed in the 1950’s. The current structure was rebuilt on the same site as the old home with much of the layout resting atop foundation areas that would have been part of the previous structure. There are six residents residing in the home including three minor children and several family pets. There are neighbors nearby yet the distance between homes is such that privacy and noise are not a concern. Traffic along the road is light and sparse. The Fringe Paranormal research department has traced the land the home sits on back to 1870. The original home on this one acre of land was built in 1950. As mentioned previously, the original home burned down and was rebuilt in 2009.

The majority of the claims of paranormal activity in this house center around a pre-school age female child and other children. The alleged activity at this home began in the summer of 2010 after the rebuild. Activity started with the mother having feelings of being watched. Items would disappear only to turn up hours or even days later. Family members have woke during the night to hear footsteps upon the stairs and things falling in the attached garage only to find nothing disturbed. There are also reports of hot and cold spots in the home. The parents sleep in a main bedroom downstairs and report that the bedroom door has opened or closed on its own, sometimes slamming. The mother, on at least one occasion, has seen a shadow figure out of the corner of her eye. One evening while in bed, she reports the feeling someone or something sitting on the foot of the bed. Adjacent to the bedroom is the living room. One evening the family reports hearing the doorknob of an outside door jiggling and a tapping on the glass.

There have been instances of technological anomalies occurring. The family has heard distant music or the sound of a TV. The family has returned home to find lights on when, to the best of their knowledge, no lights were left on when they left the home. An adult brother and cousin claim that one evening the television they were watching turned off on its own. The internet service to the home experienced some problems which could not be explained by the provider. While on the phone with service personnel the homeowner heard what sounded like perhaps a muffled growl or other unidentifiable sound.

As previously stated, much of the activity at this location seems to be around the younger children in the home. A male grade school age old child has seen what he describes as a man standing in the kitchen looking into the parents room. An older male child wears glasses. One morning the child awoke to find that the glasses, which he removes before bedtime, were unexplainably broken. Children spending the night in the home for sleepovers have reported strange activity as well. Reports include seeing a little girl and hearing noises or toys inexplicably sounding off. The two male children in the home claim that a woman, who at the time they thought was their mother, has woken them throughout the night on one occasion. In a similar vein, the mother reports that she has heard someone yell “mom” only to find that her kids are either sleeping or not at home. Perhaps the most intriguing aspect of this case revolves around a preschool age female child. This child ,who we shall call by the pseudonym “Olivia”, seems to be the focus of much of the alleged activity in the home. She has woke up with scratches on her face that were not there when she went to bed (one of her brothers, when he was younger, also awoke with scratches ). Recently, Olivia has developed some imaginary friends. She has spoken to a “Donnie” or “Donna” once or twice, but her most frequent visitor is named “Nina” or “Nina-bell”. Olivia speaks with “Nina” quite often and engages her much like she would any other flesh and blood child. Toilet paper has been found completely unrolled from the spool in areas Olivia and “Nina” have been. Olivia has said that “Nina” has pulled her hair on at least one occasion. “Nina” is described by Olivia as about eight years old with brown hair and green eyes and often seen wearing a dress with an elephant on it. “Nina” says that her house caught on fire and burned down. Olivia plays ball with her imaginary friend, rolling it around the floor, etc. The parents have heard the ball rolling around after everyone has been asleep. “Nina” has also asked Olivia to go swimming with her outside. All of the above alleged activity plus several family members hearing voices led to Fringe Paranormal being called in to investigate.

The Fringe team along with guests Chad and Matt from Weston Paranormal arrived at the target location around 10:00pm. The team surveyed the two story structure to acquaint themselves with the surroundings and decide upon video camera placement. One camera was placed on the second floor landing shooting down the main hallway. Downstairs, cameras were placed in the master bedroom and at the main entrance door looking in towards the kitchen, dining room, and ground floor bathroom. A fourth camera was set outside the master bedroom shooting towards the stairway and taking in the entrance way camera and the surrounding area including the stairwell. If possible we try to have a camera in the field of view of other cameras in the event something should effect that camera or the immediate environment around it. Motion sensors were placed in several locations as well as on the stairway. The first order of business was to try to recreate the door slam often experienced in the master bedroom. While the door swung easily upon its hinges it would take a sufficient amount of force for it to close or slam shut. Simply pushing it is not sufficient to cause it to slam or shut completely. As many of the claims of the homeowners involved noises made by children’s toys we decided to focus on Olivia’s room upstairs. We conducted EVP sessions and took photographs with the goal of obtaining evidence of some type of presence or activity. During our stay in Olivia’s room agent Ray observed what appeared to be a small shadow in a corner of the room. Unfortunately the shadow was gone before any other investigator could confirm the sighting. Throughout the evening the Fringe team, which was divided into two units, alternated between the second and first floor. During their investigation of the second floor agents Al, Tami, Chad, and Matt conducted an EVP session in Olivia’s bedroom. Al professed to hear an audible whisper. The first floor team confirmed that they had not been making any noise at the time the whisper was heard. The remainder of the investigation continued with EVP sessions, photography, and observation. The Fringe team ended their investigation at 3:00 am. Our next order of business would be to examine the video footage and evaluate our audio.

The Fringe team did not collect any evidence of note during this investigation. One Fringe agent reports a personal sighting of a strange shadow and another reports hearing a whisper. Unfortunately, we cannot use these experiences as evidence due to the fact that no one else witnessed or captured these events on any type of recording device. Examination of our video cam footage revealed nothing out of the ordinary.

While our digital voice recorders picked up nothing, the client provided us with interesting video and audio of their daughter interacting with her imaginary friend. At two points on the audio portion of the video one can hear a strange sound (somewhat like someone clearing their throat). We can say without reservation, based upon the video and our own observations, that the female child does indeed interact with some sort of imaginary friend. We are unable to explain some of the claims associated with this case, such as the door shutting by itself in the main downstairs bedroom. The scratching sound on a downstairs window or an interior/exterior door handle rattling could possibly be explained by wildlife as the home is in a rural area. We have no explanation for claims of footsteps on the stairway. It should also be stressed that there may not necessarily be any correlation between Olivia’s imaginary friend and any alleged paranormal activity at this location. Care should be taken when equating paranormal activity with technological issues. Quite often glitches may occur with appliances or utilities such as phones or cable services that may have no explanation. As an illustration, sometimes a family may return home to find their garage door open when they are certain it was closed when they left the home. While there is no way to prove it, it is quite possible in this type of situation that an errant signal from the area caused the door to open at a later time. Natural factors may be at work when unexplained activity occurs involving technological devices. It is a natural human reaction to ascribe supernatural causes to things we can not explain. This is something one must always keep in mind when investigating alleged paranormal activity.

As with all paranormal investigations there is no guarantee that activity will occur. Although we did not obtain sufficient evidence of any strange activity we believe this location would merit further study. We base this conclusion on the audio provided by the client and the volume of claims of activity.

Client Audio– This audio was obtained from the client. About 7 seconds in there is a throaty sound where upon the child starts interacting with her imaginary friend