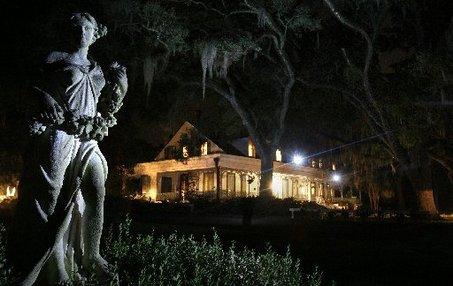 .
Nestled amid a scenic stretch of natural landscape in Saint Francisville, Louisiana, the Myrtles Plantation is recognized as one of the most haunted locations ever investigated. It is hard to brush off the number of sightings and strange occurrences that have been reported by numerous witnesses visiting beautiful plantation house. On first glance, it looks like a lovely place to spend a relaxing vacation in the south rather than the location of so many deaths.

Haunted History: A Long List of Strange Occurrences
Part of what makes the Myrtles Plantation so special is the frequency and variety of the hauntings reported here. Many are consistent with old stories from the location’s past. The home, which is over 200 years old, has seen its share of inhabitants. It is really no wonder that so many would choose to revisit the plantation, even after their death.
The home was owned by Ruffin Gray Stirling who had a family that included nine children. It was reported that five of the children died at very young ages. The eldest son, Lewis, was said to have been murdered in the plantation house over a debt owed for gambling. Later, his sibling Sarah married William D. Winter and moved to the plantation to help her mother after her father passed away.
During their stay, Winter was mysteriously shot on the front porch of the house, making it to the stairs where he perished. The murderer was never brought to justice. Guests staying in rooms closest to the staircase have reported hearing footsteps that travel up from downstairs. They always seem to stop on the seventeenth step, which was as far as Winter made it before the wounds claimed his life.
The ghosts of slaves are believed to wander the premises as well, including that of Chloe. The story tells of Chloe’s attempt to gain favor with the masters by first poising the family then nursing them back to health. She dropped a handful of Oleander into a birthday cake. Unfortunately, the attempt failed and the girls perished. After, the other slaves hung Chloe as punishment, and to avoid incurring the wrath of the girls’ father. All three have been sighted on the estate.
Other curious occurrences include the plantation’s grand piano suddenly playing with no one around. It always plays a single chord, which is somehow fitting for such a haunted place.
The first reports of the supernatural at the Myrtles began in the 1950s, when the current owner Marjorie Munson complained of unexplained events in the home. After, many of those who owned the old plantation confirmed this with tales of their own. The list is long, and seems to be growing.

The Myrtles Plantation Today
Unlike some haunted locations, the Myrtles welcomes guests and is relatively accessible. Visitors are welcome to book a stay in the luxurious guest rooms that have been set up there. If you plan to witness the plantation in person, be prepared to pay a generous sum for your accommodations. Also unlike some haunted buildings, the Myrtles is very well kept and has garnered affection from those who work there. In general, the hauntings are not viewed as malicious or terrifying, but rather as a part of everyday life on the plantation.