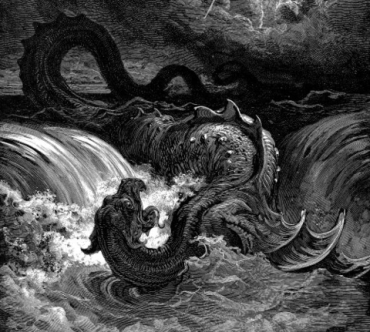 The ocean is an amazing place. This is one of the few areas on the Earth that still have regions untouched by man. Long ago, human begins would cross the great seas on voyages that could last months or even years. Far below the bottoms of ships, aquatic life thrived. On occasion sea creatures and man would clash and great stories of unthinkable monsters would result. The question is, were they situations of pure misidentification or a chance meeting with an as-of-yet unidentified beast of the great seas.

Con Rit in particular refers to a centipede-like creature claimed to roam the open waters near Southeast Asia and Algeria. There have also been many accounts of other monstrous organisms thriving in the ocean throughout the world, from prehistoric survivers to completely new and amazing organisms.

July 6th: While sailing past the coast of Greenland, Hans Egede, the national saint of the country, and his crew saw a “most terrible creature” that they could not identify. Egede claimed that the beast’s head lifted from the waves at a height taller than the crow’s nest of the ship. He commented that the body was short with a wrinkled appearance while the head was small compared to its overall size. It moved through the water with great fins. From head to tail, it was longer than the entire ship, according to Egede and his crew.

Monstrous sea beasts are reported along the coast of New England.

August: Crew aboard the Saint Helena traveling through the South Atlantic claimed to have encountered an aquatic monster measuring roughly sixty feet in length. They described it as having a strange, maned head, which it held above the waves. When the reports went public in London, many people became interested in the phenomenon. Skeptics tried to debunk the story, such as the English biologist Sir Richard Owen, who insisted it was nothing more than an elephant seal.

Naturalists E.G.B. Meade-Waldo and Michael J. Nicoll were sailing along the coast of Brazil when they sighted a creature they had never seen before. The animal had a large dorsal fin, a head similar to that of a turtle, and a long neck. Some tried to explain the sighting as the mis-identification of a giant squid. The neck positioned out of the water did not fit in with typical squid behavior (squids do not swim with their arms and fins out of the water).

There have been many reports of strange creatures in the decades since 1905. Some are quickly met with skepticism and debunked while others are dismissed outright. Although there are cases of simple mis-identification, the ocean is a vast place with plenty of potential for a sizable creature to live undetected for a long time. Some believe this could also explain the origin of the Bloop.

Misidentified sea life is one of the most common explanations for a sea serpent sighting. In some cases, such as the more recent incident involving the Japanese trawler Zuiyo Maru, modern science can offer an explanation.

The crew aboard the Zuiyo Maru spotted a bizarre creature that they thought was a plesiosaur. It was caught in the trawl. A body tissue analysis later confirmed the tissue actually belonged to a basking shark. Creatures such as baleen whales, sea snakes, birds, eels, and giant squid have all been misidentified as sea serpents at some point. Even floating sea weed and drift wood have spent some time in the sea serpent limelight.

A Final Word On Sea Serpents

Centuries ago, man did not have the technology and knowledge to conduct thorough scientific investigations as they do now. Many things were still considered unheard of that are common knowledge today. It is probably safe to say that most sea serpent sightings are cases of mis-identification or a hoax. What makes this so intriguing is the possibility that maybe even one case wasn’t a mis-identification. There is no way to know for sure. At least not until someone figures out how to travel back through time and place themselves aboard those ships to bear witness first hand. For now, the ocean remains a rippling stage for curious possibilities and the fantastic tales of those who explore it.

2 thoughts on “The Terror of Con Rit, the Sea Serpent”